Once again I set out to an abandoned building to try to crack down on the supposed haunting’s of Drakelow Tunnels with Anya and Dan. We were with the Spooktacular crew
who run a no messing about or fakers standard and pretty much just guide you about and let you try to contact the dead. 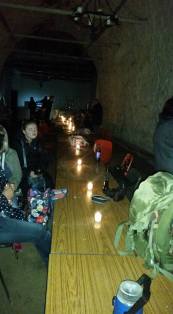 bandoned tunnels. My adrenaline was pumping and I was already worked up from watching stories about the place. I was aware that I needed to take this into account as I could have easily have started to freak out from my own imagination.

As me and my group followed the rest of the people down the dark candle lit tunnel we entered a large hall with what looked like a long table in a harry potter style. Here we got told the layout of the evening and then all went to do an open

ing circle in one of the tunnels. Jo had a load of random WW2  songs and speeches on her phone in hope that it would evoke the ghosts  down there. Besides the odd tap and slight paranoia from a few people nothing happened. We then split into smaller groups to do a vigil.

We set off with Bill into a small room and he wacked out his Ouija board and told people not to move the planchette as it annoyed him and whats the point in faking it. I pointed out that people can move it subliminally though and told him about the experiments where people have been blindfolded and its been clear people are moving it without knowing. Regardless of this I started thought I would crack on with it just to see. I planted a few seeds by mentioning dates and random names and in time it started moving to a story that I fabricated based on information from a Most Haunted episode. Soon enough I asked for the date and the number I mentioned earlier was given. Now either someone on the table had taken in that information and moved it or it was a ghost. I will leave for you to decide.

Once we finished are little session in that room we were whisked off to Sian’s dark boiler looking room where she said things were kicking right off. I was not expecting much but

she gathered us in a circle and shut off the lights so I could not see my own glasses on my face. She then asked for the ghost to come back and indicate with a bang. Then to the right of me a large bang followed. I replied with “no f**king way I need to document this” and left the circle and started recording with my camera. These taps and bangs continued and I was aware everyone was in the circle so they were not doing it, but being dark I could not tell what it could be, other than a ghost.

We all set back to the harry potter room and I decided to go alone back to the banging room. As I went in I heard a large bang and jumped a mile. I then heard a few more and started hearing little taps and clicks. I then noticed water was dripping from the roof down onto the large cylinders and boiler units. It seemed I have debunked the bangs and promptly renamed the room, “dripping room”.

We then had one finale vigil in the kitchen sections where a paintball smoke bomb seemed to come from nowhere. aka someones hand as it was conveniently pitch black when it hit a unit. Not much really happened apart from few tapping sounds down the tunnels which people said were footsteps and there was also some very faint crying sighing sounds which were a little unnerving but I cant be sure it 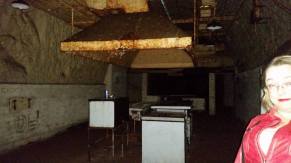 was not someone in the group or another group down in a different section. Throughout the entire evening I also had my bell on me which also never went off once despite the fact the “ghosts” seemed to have the ability to tap and chuck things.

Finally we got to have some free time to venture into the tunnels. I decided I wanted to go deep and get lost. I did my own little call outs to apparent ghosts but with no knocks
cry’s or replies of any kind. I did however enjoy the general atmosphere and the sense of exploring the left overs of an old war bunker. Going down large tunnels round tight gaps

and through small holes in large walls to go to places far from the main group. This however soon got us quite lost and I started to wonder what was went there. I was expecting David Bowie as the Goblin King to step out and tell me I would never complete the labyrinth to reach his castle. I then came across which looked like a newly boarded up area and noticed a way round. what I found inside I was not expecting.

As I went round the right gap it opened up into a raided cannabis farm full of buckets and units that would have been used for growing. It was at this point we decided we sh
ould head back.

up and left and only a few of the Spooktacular team were there. I started to wonder if we had gotten lost I may still be wondering the dark tunnels now.

Overall I really enjoyed the atmosphere of the place and would go again. Regardless of if there are ghosts or not its a cool place to go see and you can certainly allow you own imagination to run wild and take over as I felt this happen a few times myself before I decided  to rationalise it and calm back down. I also like to say thanks to the spooktacular team as they don’t mess about and fake stuff they supply a good deal of equipment and just let the night roll.